Four students enrolled at Chadron Primary School were recognized with a Certificate of Perfect Attendance on the last day of school, May 20th.  The students were Carlin Canaday and Abigail Jamison - Kindergarten; Rhylee Wilberger and Brayden Linegar - First Grade. These students were neither tardy no absent during the entire year.  Congratulations!
Posted by Unknown at 2:05 PM No comments: 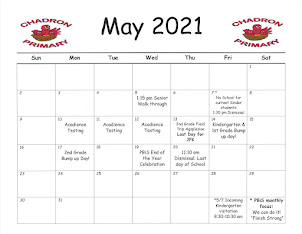